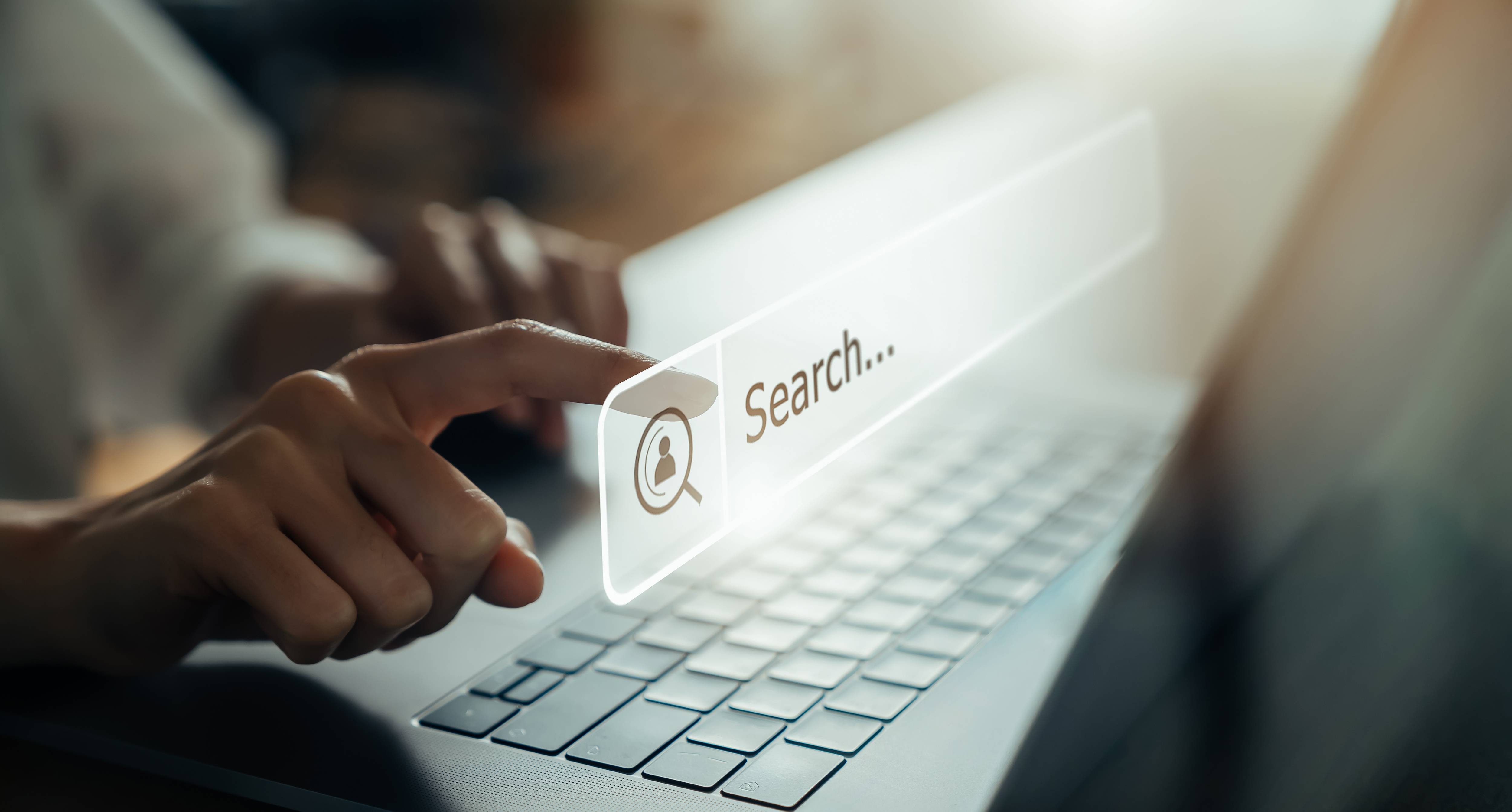 Adding search functionality to your project can sometimes be tiresome. It is often required to search against large text documents where the database LIKE operator simply isn’t enough. It cannot handle cases where you don’t write the exact search query. The query %Laravel — The PHP Framework% is not the same as %The PHP Framework — Laravel% and often you won’t get any results for such queries. It’s not even worth discussing how much MySQL LIKE operator performance sucks.

If you have support, you won’t be able to search on multiple columns. The match queries are a little bit complicated and they don’t get you good results.

Of course there are great solutions out there to handle full text search, most famous ones being Elastic search and Sphinx, but often they seem like just an overkill especially for “smaller” projects.

What’s the solution then you may ask? Luckily, there is a package written in pure PHP that does the job for you. You might be wondering how good or fast pure PHP can be.

Well, to comfort you here are some numbers. To build up a demo page for the search which has 57000 Tv Shows and 130000 Actors and all is searchable:

As you can see the fetching is extremely fast and since the package is using state of the art relevance algorithms the relevance is much higher than in other PHP solutions. The performance of the package is great because the index is built on top of a sqlite database which is an extension written in C and comes default with PHP. And you cannot beat C :)

For the documentation layout we’ll be useing http://getuikit.com/. It’s as they claim a lightweight and modular front-end framework for developing fast and powerful web interfaces.

Before we can build an inverted index we need to somehow get the phpunit documentation. Our approach here is to simply scrape the latest version of the docs. We’ll create a laravel command that will be responsible for scraping the phpunit site. After the scraping we’ll create the index.

The command name will be docs:index so that we later can run 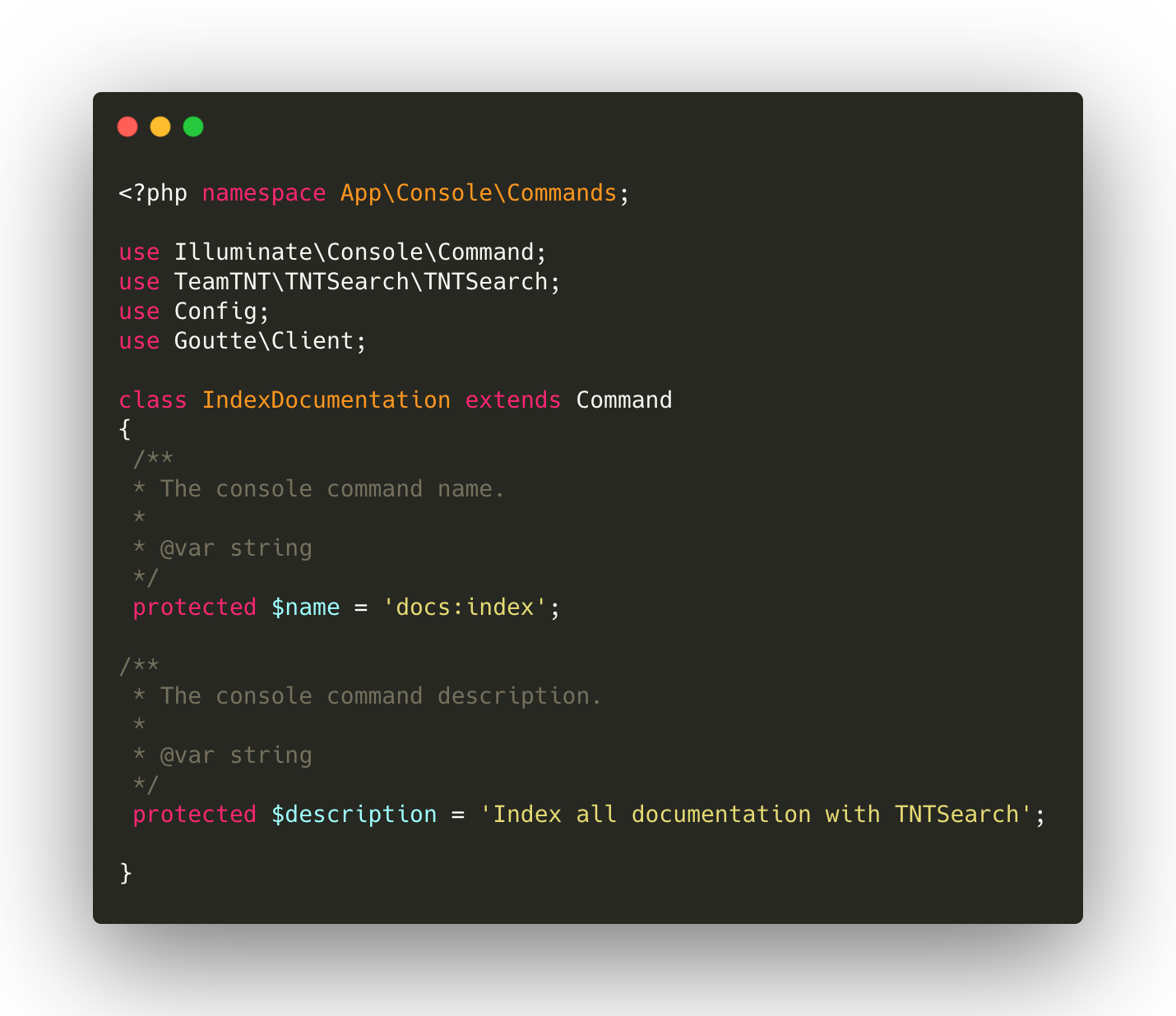 Scraping the phpunit site is very simple and can be done with one function. What we’re doing here is that we’re going to the phpunit.de site, taking the table of contest and saving it to index.html. Each chapter is saved to its own html file. All of the documentation is saved to resources/docs/ 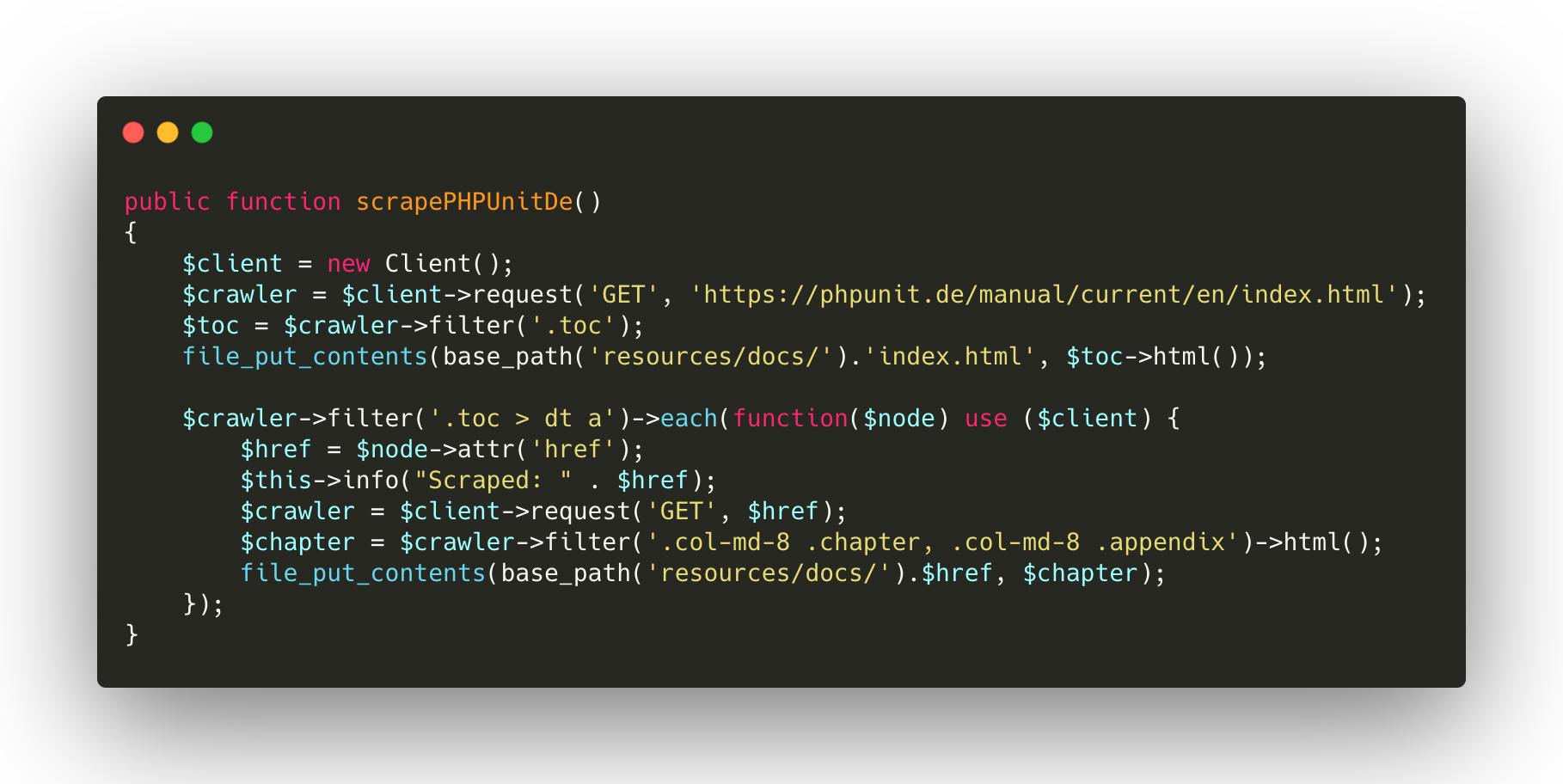 Once we have scraped all of the documentation, it’s time to build the inverted index.

An inverted index stores all of the words that are contained in the documents and their positions.

For example, it tells us that the words Martin Fowler can be found only in writing-tests-for-phpunit.html. Here’s a definition from wikipedia:

In computer science, an inverted index (also referred to as postings file or inverted file) is an index data structure storing a mapping from content, such as words or numbers, to its locations in a database file, or in a document or a set of documents (named in contrast to a Forward Index, which maps from documents to content).

Using TNTSearch, building the index is trivial. We only need to provide it with some basic configuration. The storage directive represents where the index will be stored. The driver is filesystem because in this case the source are files located on disk that we downloaded before. The location directive looks for the documentation files. Exclude and extension directives are self explanatory. 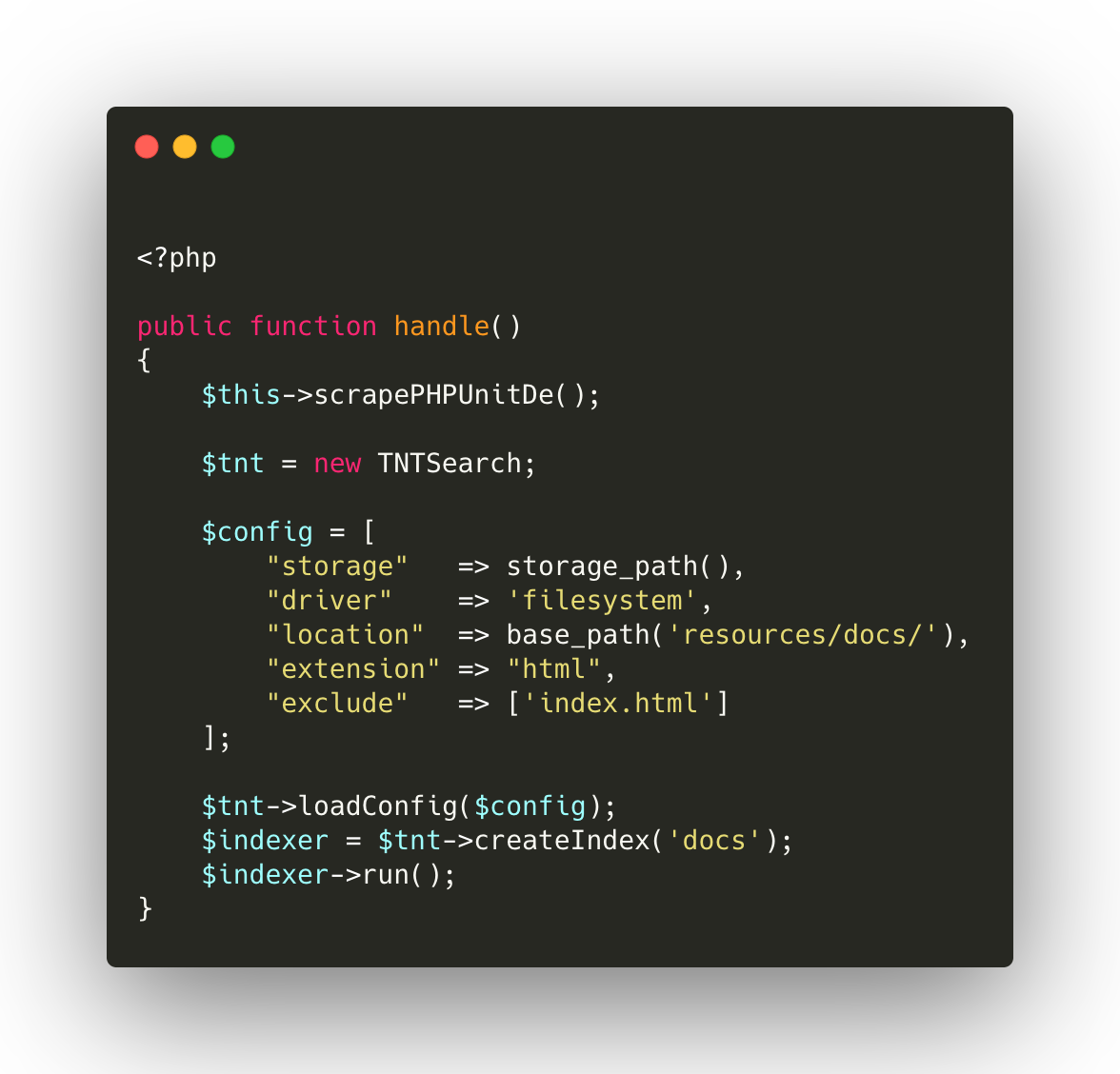 The command is now complete and we can run php artisan docs:index. This will create an index that we can query against.

Now that we have the index it won’t be a problem to search for relevant documentation. The frontend part will have twitter’s typeahead plugin and on every keypress it will hit the server asking for search results. The route that we’ll hit is /search and it will dispatch our request to the DocsController.php. The search method looks like this:

A handy feature is the asYouType property, which means it will return results even for single letters. The only thing left is to prepare the output for the frontend: 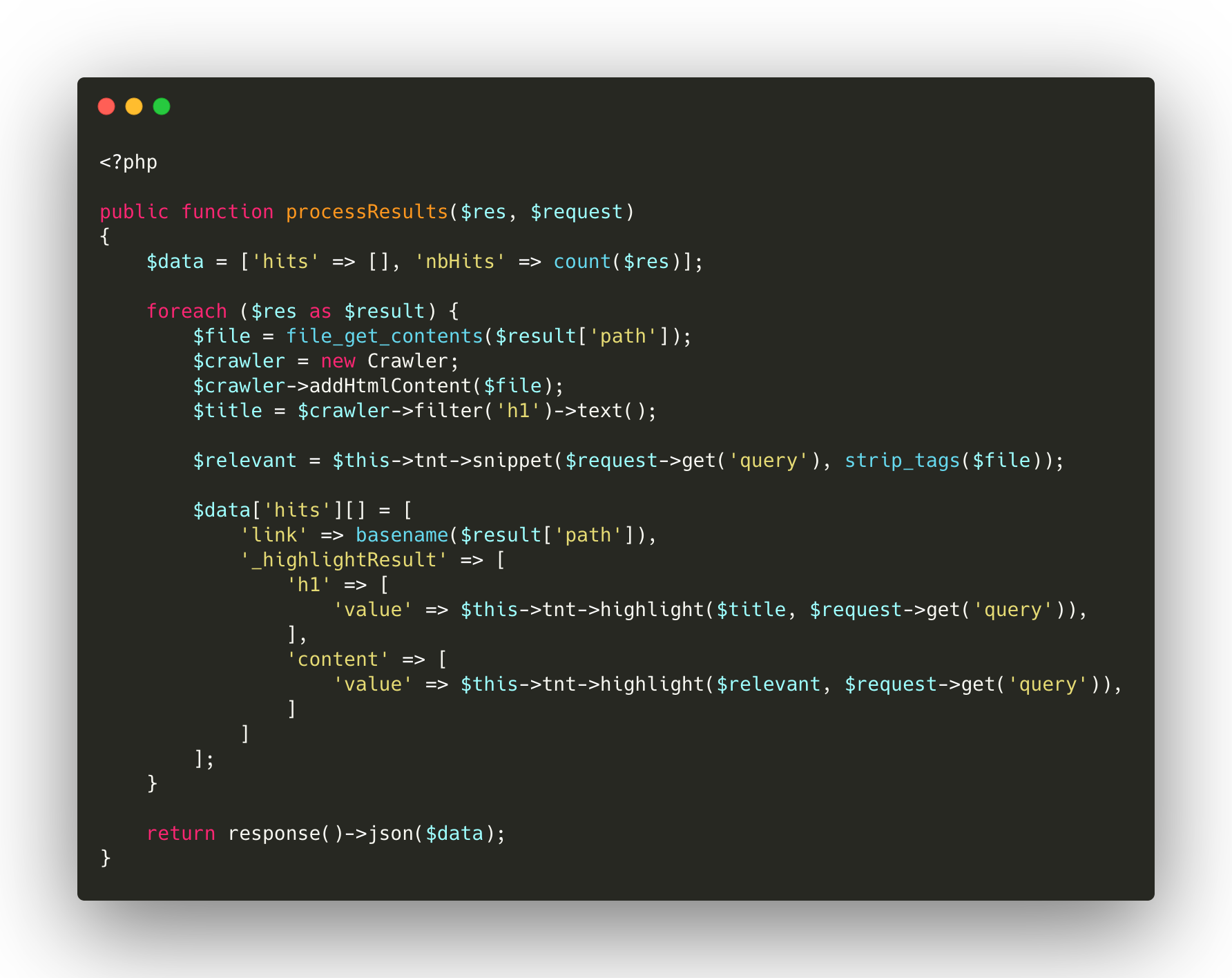 There are couple of helper function like highlight or snippet which lets you better format the output.

A working example of this documentation can be found here. If you want another showcase take a look here. If you like the package, don’t forget to star it on github.